What is the area that can be imaged by the eBee drone during one flight?
Photogrammetric documentation of cultural heritage – example of a 3D model of the Church of St. Margaret
How progressive numbers of Ground Control Points effect on the DEM and orthoimage accuracies
15.05.2017 Technology

In the study the following specific questions were addressed:

The results of the research were intended for use in environmental projects such as flood studies and flood risk simulations, where the accuracy of the DEM is particularly important, but the study is also interesting for other fields of application.

The survey area was comprised of 29 Ha of urban parkland in the City of Glasgow, Scotland in the United Kingdom. 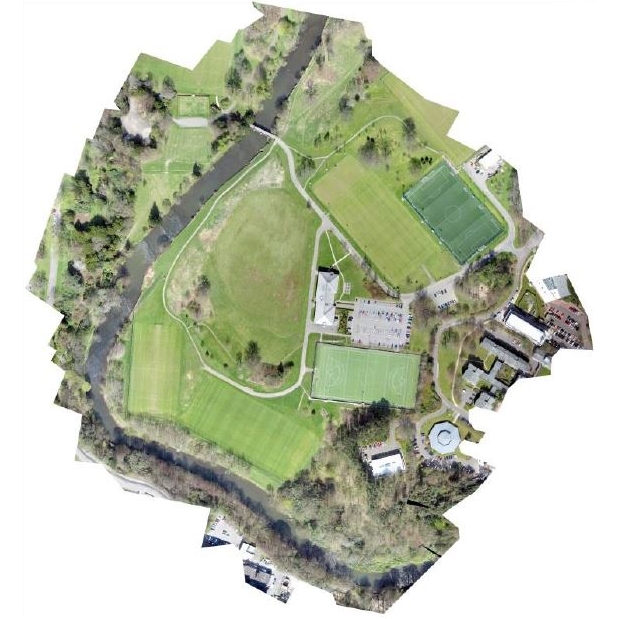 The aerial survey was carried out using a SenseFly Swinglet CAM UAV. A survey plan was set up using the SenseFly E-motion software, specifying a minimum image endlap & sidelap of 80%, with no segment of the survey extending outside a 500 m line of sight radius from the intended flight launch point. A maximum flying height of 90m above launch height was selected, generating a ground pixel size of approximately 3.5 cm x 3.5cm.

The ground targets consisted of 20cm x 20cm black and white 4-panel checkerboard grids printed and laminated at A4 size. These were nailed to the ground surface at the locations outlined in the target plan immediately before the aerial survey. The XYZ coordinates of the centre points of the in-situ targets were then re-surveyed with the Leica GS08 GNSS receiver, generating a set of high accuracy XYZ coordinates for all 61 target locations.

A new orthoimage and DEM was produced for each of six subsets of the full 61 GCP set. These subsets consisted of: 5, 10, 15, 30, 45 and 61 GCPs. This progressive introduction of additional GCPs was undertaken in order to demonstrate the orthoimage and DEM accuracies that were achievable using differing numbers of ground control points. This information may be of interest to those who are considering the use of UAV DEM data in environmental modelling applications, helping to approximate the numbers of GCPs that may typically be required to achieve the accuracy required for a given application. The spatial distribution of each GCP subset was selected to achieve an approximately equal separation in each case (approximately 1 GCP for every 2 Hectares). Successive subsets encapsulated the previous set, adding further GCPs to that set (Picture 1). In total (including the orthoimage and DEM that were generated using interior orientation) this produced a final tally of seven sets of orthoimages and DEMs.

Photogrammetric processing was carried out using Agisoft PhotoScan Professional. The accuracies of orthoimages and DEMs were quantified in PhotoScan, with some additional external checks being performed in ArcGIS.

The table below shows the RMSE (Root Mean Square Error) accuracy statistics for all seven orthoimages and DEMs that were generated via photogrammetric processing. More detailed statistics are published in the original article.

Table: RMSE accuracy statistics for all seven orthoimages and DEMs

The zero-GCP orthoimage appeared at first glance to achieve generally good horizontal accuracies, but even a visual comparison of feature edges with national mapping agency 1:10,000 vector data indicated that some horizontal errors were apparent: positioning errors of up to 6m, and mean errors of just under 3m (RMSE XY 3.265). Errors were generally smaller in portions of the survey area that were at similar elevations to the launch point, but were approximately twice as large elsewhere.

The DEM that was generated from internal positioning and orientation data (i.e. the zero GCP DEM) was characterised by elevation errors that ranged up to 6m, with 95% of these errors as large as 5m, and with an overall RMS elevation error of 2.2m. This DEM also failed to represent all but the most prominent 3D features (a few buildings were vaguely discernible in the data) presenting an unrealistically smooth model of the topography.

Using as a little as 5 GCPs for orthoimage generation produced significantly improved results. Mean horizontal orthoimage errors reduced to 0.28m, suggesting that even a relatively small number of external GNSS GCPs (one for every 6 hectares when 5 GCPs were used) may produce a useable orthoimage. Doubling the number of GCPs to 10 produced additional marked improvements, with mean horizontal errors reducing to 0.14m.

Orthoimage and DEM accuracy improved very substantially when 15 GCPs were used. Orthoimage positioning errors in this case reduced to a total range of under 0.4m and with an overall RMS horizontal error of 0.08m.